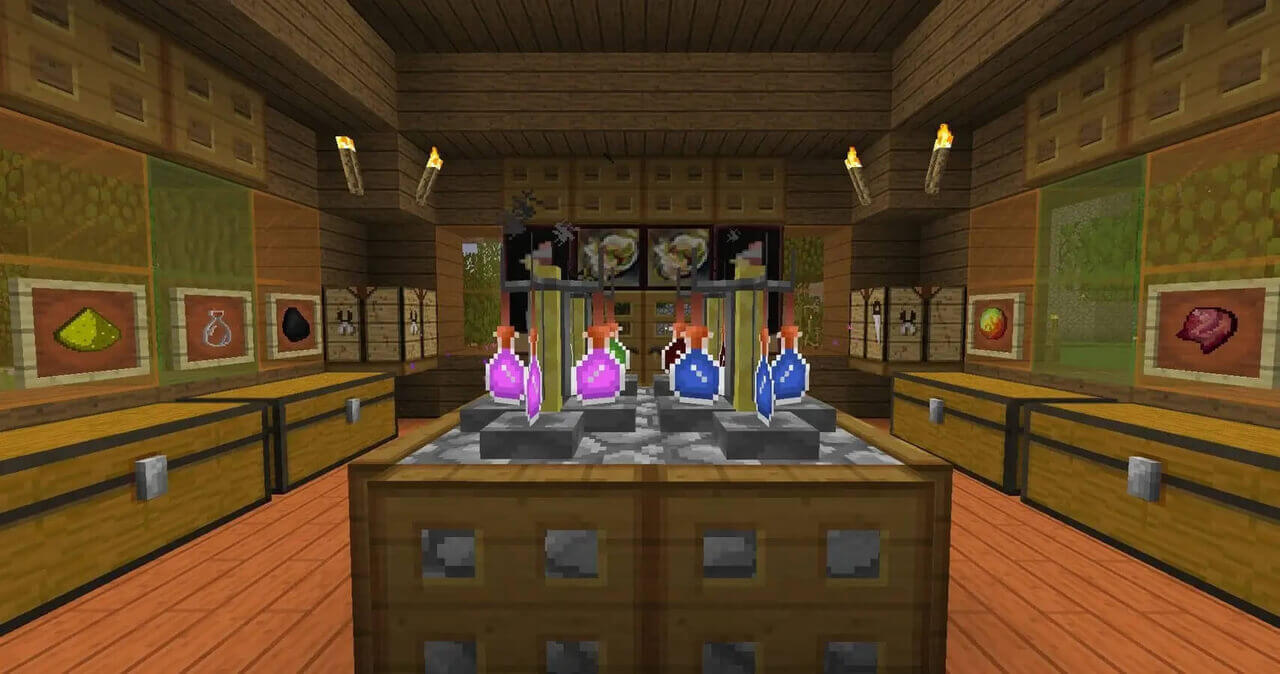 Potions can come in handy if you’re playing Minecraft in Survival Mode. You can consume a potion that boosts your melee attacks, increases your speed, or allows you to breathe underwater. This article will show you how to construct potions in Minecraft, including those that may be used to attack foes.

However, in Creative Mode, gamers do not require potions. Even so, they’re enjoyable to make, even if the process of personally getting each item can be lengthy. Your adventure involves a trip into the Nether, fishing, rabbit hunting, and more.

Depending on the type of potion you wish to make, potion-making can be a mind-bogglingly difficult task in Minecraft. You can only begin brewing Potions when you’ve acquired a variety of Nether resources, but after that, you can use this guide to learn how to manufacture all varieties of Potions in Minecraft 1.18. If you wish to defeat the Wither, you’ll need a lot of remedies on hand.

In this article, you’ll learn how to make potions in Minecraft. Depending on the ingredients, potions might improve your strength, restore your health, or even injure your opponents.

You’ll need a big list of ingredients, five of which are in the Nether. That means you must construct a portal, travel to the underworld, combat enemies, and locate a Nether Fortress without becoming disoriented.

Journey to the Netherworld

The Nether, especially for new players, is extremely deadly. Keep in mind that each block traveled in the Nether is equivalent to eight blocks in the Overworld. Consider leaving indicators, such as torches, that direct you back to the gateway. Switching to “Peaceful” mode would also be a good idea – at least until you get back home.

Gather ingredients from the Netherworld

Modifiers for potion effects in the overworld

Fermented Spider Eye –  is made using one spider eye, one brown mushroom, and one sugar.

Gunpowder – Creepers, Ghasts, and Witches all drop gunpowder, which can also be found in chests.

Without this contraption, you won’t be able to produce a potion. In a Crafting Table, mix 1 Blaze Rod and 3 Cobblestone to make a Brewing Stand. Place the three Cobblestones in a row, with the Blaze Rod in the center, as follows. Follow the below steps to craft a brewing stand:

To open the brewing window, place the Brewing Stand on the ground and right-click it. It appears complicated at first glance, but it’s actually rather simple:

Blaze Powder is added to the far-left slot to fuel your brewing, just like Coal is added to a Furnace.

The bottles of potions that you want to change should be placed in the bottom three slots.

In the top slot, you can put a component that will change the effects of the potions below.

Every time you add a new ingredient to a potion, the effect will take 20 seconds to manifest. However, you can save time by brewing numerous potions at once with the three potion slots at the bottom. Just keep in mind that you’ll be OK.

Create a Cauldron (not mandatory)

You’ll need water, so why not construct a small pool alongside your Brewing Stand?

Create and Fill your Glass Bottles

Find a water source (such as a Cauldron full of water or a body of water), equip the glass bottles, and choose the water to fill them. You’re ready to start crafting potions after you have a stack of three glass bottles.

You’ll need a container to hold your brewed liquids.

To begin, make an Awkward Potion, which serves as a “foundation.” It’s similar to the carbonated water in your absolute favorite cola: without it, you’re just drinking syrup.

Now that you have the Awkward Potions, you must solve the awkward puzzle of making functional potions.

However, because the list is lengthy, we divided it into three categories: positive, negative, and mixed. Keep in mind that all potions begin with the Awkward Potion you just made. We list the primary ingredients and general effects of each potion type next to it. We also include a list of the modifiers you’ll need to boost or prolong its effectiveness.

You’re certainly out to hurt your opponents, thus any type of fight necessitates the preparation of a poisonous concoction to launch at oncoming foes. Slowness or poison are two of our favorite tactics. Of course, not all potions are harmful, and many of them have healing and strengthening properties. Those potions, on the other hand, should be reserved for yourself, not your foes.

Make a splash potion that lasts

This potion’s effects will linger on its victims long after you’ve dispatched the splash, making it ideal for dealing with a steady barrage of opponents.

How to make potions in Minecraft?

How to make strength potions in Minecraft?

1. Go to the Brewing Stand menu and select it.
2. Activate the Brewing Stand using Blaze Powder
3. To produce this potion, combine the following ingredients.
Add the Nether Wart and the Water Bottle
Blend in the Blaze Powder.
You’ll hear a “glug glug glug” sound when the brewing process is finished, and the blaze powder will vanish. The Strength Potion will now be completed.
The Potion of Strength increases your strength and gives you a +130 percent increase in attack damage for 3 minutes if you drink it.

How to make invisibility potions in Minecraft?

Ingredients are placed in the top box of the Brewing Stand menu, while potions are generated in the lower three boxes. You’ll need 1 Potion of Night Vision and 1 fermented spider eye to brew a Potion of Invisibility.

How to make lingering potions in Minecraft?

1. 1 Blaze Rod is needed to make Blaze Powder.
2. 4 wood planks can be used to make a crafting table. You can use any sort of wood for this project (Warped Planks, Crimson Planks, etc.).
3. Open the Crafting Table and place it on the ground to reveal the 3X3 crafting grid.
4. Make a Brewery Stand. In the top row, place a Blaze Rod in the center and three Cobblestones in the middle.
5. To access the brewing menu, place the Brewing Stand on the ground and interact with it.
6. To activate the Brewing Stand, place 1 Blaze Powder in the upper-left box.
7. Put any Splash Potion in one of the brewing menu’s bottom boxes.
8. Place Dragon’s Breath in the brewing menu’s top box.
9. Keep an eye on the progress.

How to make custom potions in Minecraft?

How to make potions last longer in Minecraft?

If you want to lengthen the duration of the potion’s effects, mix in some Redstone dust.

How to make weakness potions in Minecraft?

Quickly access the brewing stand menu and use one Blaze Powder to heat it up.

To begin the crafting process, place the Water Bottle in one of the bottom flask slots and the Fermented Spider Eye in the top flask slot. You’ll get a Potion of Weakness as a result of this.